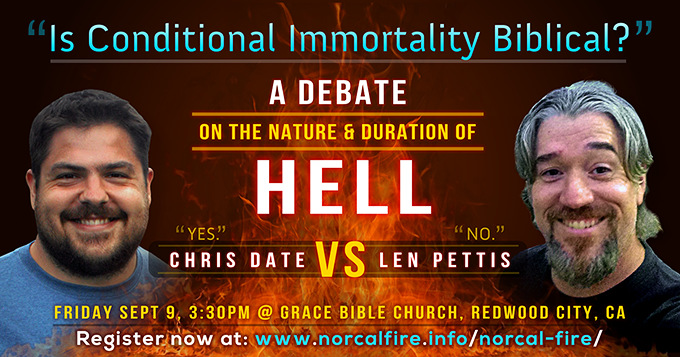 Do you live within a road trip’s driving distance from Northern California? And do you enjoy live debates, or are you on the fence when it comes to whether the Bible teaches conditional immortality or the traditional doctrine of hell? Striving for Eternity Ministries is hosting a debate between Rethinking Hell contributor Chris Date and Bible Thumping Wingnut co-host Len Pettis, at the ministry’s free, annual Norcal Fire conference on Friday, September 9th at Grace Bible Church in Redwood City. From the conference website:

Is conditional immortality biblical? A debate on the nature and duration of hell.

Chris Date, host of the Rethinking Hell podcast, will defend Conditional Immortality. According to this view, life is the Creator’s provisional gift to all, but will ultimately be granted to the saved forever as the gift of immortality, and revoked from the lost forever as the punishment of annihilation. Len Pettis, co-host of the Bible Thumping Wingnut show, will defend the historically dominant view of hell as Eternal Conscious Torment. Date and Pettis are conservative evangelicals and will argue for their respective views from Scripture, which they aim to uphold as their final authority.

Visit the conference website for more details and to register! 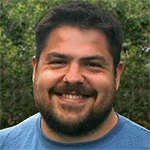 Chris Date is the host of the Theopologetics podcast and co-editor of Rethinking Hell: Readings in Evangelical Conditionalism (Cascade, 2014) and A Consuming Passion (Pickwick, 2015). A software engineer by trade, he believes theology and apologetics are for every average Joe in the pews, and not just for pastors, philosophers, PhD’s and the erudite in ivory towers. Formerly a traditionalist, he became convinced of the biblical view of final punishment over the course of a process which began when he interviewed Edward Fudge, and he has since defended the view in several debates and on Justin Brierley's Unbelievable? radio program on Premier Christian Radio UK. Chris is also a steward of the Rethinking Hell project.
All Articles
PreviousWhat did Jesus suffer "for us and for our salvation"?
Next2016 Rethinking Hell Conference Announcement
Scroll Up