Personal eschatology—the study of the final fate of human beings—should be embedded within cosmic eschatology, the study of the final state of God’s created order. God is redeeming the cosmos, and human beings within it (see Rom 8:18-25). Universalists and conditionalists both agree that God will redeem the cosmos as a whole. But universalists also claim that God will eventually redeem every human being that will have ever lived, while our claim as conditionalists is that God’s work of “new creation” purposefully excludes some human beings. Despite knowing enough about the immortal God and realizing that they ultimately deserve death they still reject him (Rom 1:18-23; 32). They disobey the gospel (1 Pet 4:17; 2 Thess 1:8; Rom 10:16), and so fail to respond obediently in repentance and faith to the knowledge of God and his offer of salvation (Acts 6:7; Rom 1:5; 16:26). They love sin rather than goodness, themselves rather than God, and are “disqualified regarding the faith” (John 3:20; 2 Tim 3:2-8).

END_OF_DOCUMENT_TOKEN_TO_BE_REPLACED

In Genesis 2:17, God’s warning “you will certainly die” (מֹות תָּמֽוּת) refers to the penalty or consequence of Adam and Eve’s sin, should they disobey God’s command not to eat from the Tree of the Knowledge of Good and Evil. They had been given free access to the Tree of Life in order to “live forever” (Gen 3:22 cf. 16), but this ongoing privilege would be forfeited if they ate fruit from the other tree, which was “good for food and pleasing to the eye, and also desirable for gaining wisdom” (Gen 3:6). They did succumb to this temptation, after believing the serpent’s lie that they would not surely die. This resulted in the introduction of human death into the world—death as normally and universally understood; sometimes called “physical death.”1I recommend against using qualifiers like “physical” and “biological” if they can be avoided, since they can imply an unhelpful dichotomy with a so-called “spiritual death.” They can also unduly provoke interest in mechanisms of bodies and souls that might attend death, but which don’t need to be qualified in the ordinary use of “death.” If qualification is needed, I suggest “ordinary death.” We should always think about death functionally, as the negation of life. So we should not think of “the second death” as categorically different from “the first death” (terminology the Bible never uses). On both occasions, death still brings life to an end, even if the second time around this may be complete and permanent (Matt 10:28). Romans 6:23 refers simply to “death” because the universal wages of sin is not first, second, physical, or spiritual: it’s just death, the ending of life.

The most common objection to the above is that if ordinary human death is in view, Adam and Eve apparently did not die “in the day” that they ate (Gen 2:17). But this is to misunderstand the Hebrew idiom “in the day” and the special function of “certainly die,” which, along with attention to context, must inform our reading of the English (lest we misread the warning with modern assumptions). As Walter Kaiser explains:2Walter C. Kaiser, Jr., Peter H. Davids, F. F. Bruce, and Manfred T. Baruch, “Hard Sayings of the Bible” (Downers Grove, IL: InterVarsity Press, 1996), p. 92, emphasis in original.

It is just as naive to insist that the phrase “in the day” means that on that very day death would occur. A little knowledge of the Hebrew idiom will relieve the tension here as well. For example, in 1 Kings 2:37 King Solomon warned a seditious Shimei, “The day you leave [Jerusalem] and cross the Kidron Valley [which is immediately outside the city walls on the east side of the city], you can be sure you will die.” Neither the 1 Kings nor the Genesis text implies immediacy of action on that very same day; instead they point to the certainty of the predicted consequence that would be set in motion by the act initiated on that day. Alternate wordings include at the time when, at that time, now when and the day [when] (see Gen. 5:1; Ex. 6:28; 10:28; 32:34).

In other words, “you will certainly die” became true instantly, as a kind of death sentence or curse. In the Hebrew, this phrase is a language construct known as an infinitive absolute.3The infinitive absolute here is paired with a finite verb of the same root, roughly as “dying-die,” for what Gotthelf Bergsträsser describes as “a peculiarly Hebrew hybrid of verbal noun and verbal interjection of imperative character.” The infinitive absolute is a verbal noun, referring not to the actual dying of Adam and Eve, but to dying itself in the abstract. Then the interjection of “die” carries a similar condemning sense to the sentiment, “Die! Die!,” only without such intensity and animus. Intensification is one function of the infinitive absolute, but in Genesis 2:17 the other main function is served: certification. Death is being certified, or made certain. Since in context the infinitive absolute emphasizes certainty, and lends this effect to the whole construction, it should be read nominally, i.e. functioning as a noun or label–not merely as a death that is incidentally certain, but as a thing called “dying-die” or “certainly-die,” that in turn carries that implication. Therefore we must conclude, even before we learn that this is indeed how it is used elsewhere, that the construct functions as a kind of sentence or curse. It has no exact equivalent in English, and should be read not as a statement about when death will occur, but rather to emphasize the certainty of death being incurred.

Not only is the language different to our own way of speaking, but the general concept is different to our own way of thinking, due to very different cultural contexts. When someone incurs the death penalty today, it happens well after the crime was committed, and is handed down in a courtroom after a formal process to convict. None of that was available or needed in Genesis, because God himself had declared what would happen. So it makes sense in this context to focus on God’s warning becoming true and certain the very moment the “crime” would occur. Simply put, the transgression would make certain the death. Beforehand, they were not going to die. But once they sinned, they were going to die. Even if this is a little unfamiliar to us, we can still see how it is simple and straightforward.

To confirm that modern Hebrew scholars have correctly understood the ancient nuances behind “In the day you eat, you will certainly die,” we can consult the ancient Aramaic rendering of Genesis 2:17 in the Targum Jonathan. It reads, “in the day that thou eatest thou wilt be guilty of death.”4See J. W. Etheridge, “The Targums of Onkelos and Jonathan Ben Uzziel on the Pentateuch,” 1862, 1865. This is clear and not prone to any misreading. But although our conventional translation is less clear and doesn’t preclude misreadings, it still adequately approximates the Hebrew. Misreadings can occur for different reasons, especially the intrusion of modern assumptions and expectations. For example, from a concordist desire to avoid any suggestion that human death never existed beforehand (based on one’s view of human origins). Or, as we often see at Rethinking Hell, based on the goal of defending eternal torment instead of death. Another reason is just the translation tradition for this well-known verse, which prefers formal-equivalence here since this is a solemn utterance of God with such far-reaching implications for humankind. Regardless, the way it is rendered in the Targum suffices to show that at the time of Jesus, people understood God’s warning to be about ordinary death.

END_OF_DOCUMENT_TOKEN_TO_BE_REPLACED 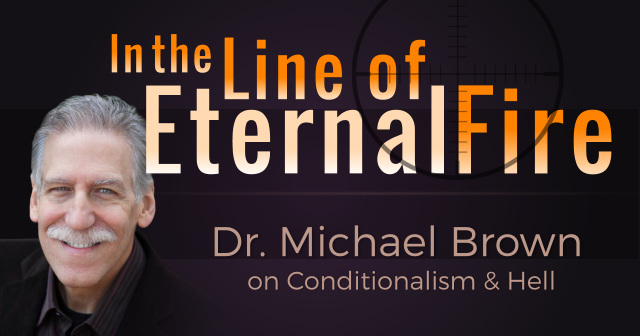