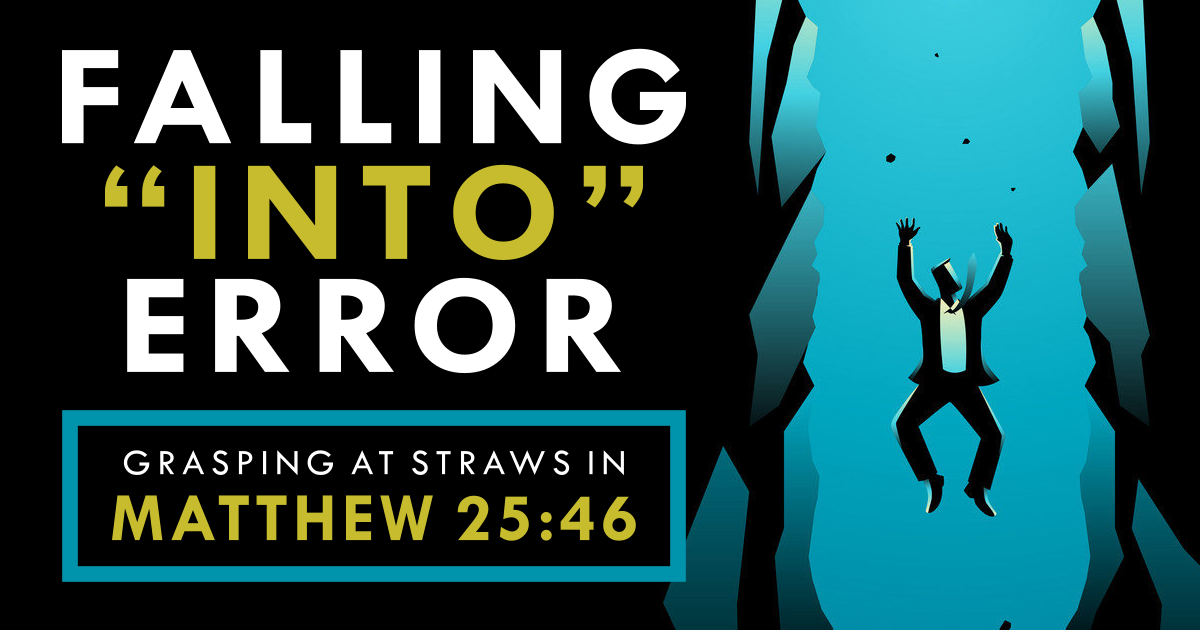 For years, I have said that two things convinced me of conditional immortality and annihilationism (hereafter, “conditionalism”) more than anything else. First and foremost, I discovered that, with virtually no exception, every proof-text historically cited in support of eternal torment proves upon closer examination to be better support for conditionalism. Second, I was shocked at how poorly thought out traditionalist arguments against conditionalism typically are. Matthew 25:41-46 is a case study in both phenomena, for it is surprisingly powerful support for conditionalism, but when traditionalists dig their heels in, they often resort to highly dubious arguments they wouldn’t countenance in virtually any other context, such as by claiming the Greek preposition εἰς (eis), translated “into,” rules out the annihilation of the finally impenitent.

Matthew 25:41-46 (especially verse 46) is one of a trio of biblical texts “conditionalists sometimes affectionately call the ‘big three’—the texts often alleged by traditionalists to be most damning to conditionalism.”1Christopher M. Date, “The Hermeneutics of Conditionalism: A Defense of the Interpretive Method of Edward Fudge,” Evangelical Quarterly 89, no. 1 (2018), 84. Yet, this text is no exception to the first discovery I mentioned above. Jesus’s use in verse 41 of the phrase τὸ πῦρ τὸ αἰώνιον, or “the eternal fire,” is not his first. He uses the phrase earlier, in Matthew 18:8-9, where it parallels τὴν γέενναν τοῦ πυρός, or, “the Gehenna of fire.” Jesus’s references to Gehenna, like this one, allude to such Old Testament passages as Jeremiah 7:32-33, in which Yahweh says, “it will no longer be called Topheth, or the Valley of the Son of Hinnom, but the Valley of Slaughter, for they will bury in Topheth, because there is no room elsewhere. And the dead bodies of this people will be food for the birds of the air, and for the beasts of the earth, and none will frighten them away.” Thus, by “eternal fire,” Jesus means the fiery, death-dealing wrath of God—which is why Jude (v. 7) uses the phrase to refer to the fire rained down upon Sodom and Gomorrah from Yahweh in heaven, slaying their inhabitants (Gen 19:24).

The Preposition “Into”: The Traditionalist’s Last-Ditch Effort

The phrases “eternal fire” and “eternal punishment” are usually the traditionalist’s only claimed basis for thinking Matthew 25:41-46 teaches eternal torment, and, as has been shown, these phrases prove upon closer examination to be better support for conditionalism (the latter inasmuch as it must not include “eternal life”). Nevertheless, the occasional apologist for the tradition will offer a rare argument from Jesus’s use of the preposition εἰς, translated “into,” in a final attempt to persuade readers to ignore (a) how the phrase “eternal fire” is used elsewhere and (b) the fact that “eternal punishment” necessarily excludes “eternal life.” For example, my erstwhile friend Michael Burgos, an otherwise very competent defender of the Trinity and deity of Christ, but who seemed to begin withdrawing his friendship after I became convinced of conditionalism, writes this:

Jesus stated that the wicked “will go away into eternal punishment” just as “the righteous into eternal life.” The preposition used in both of these clauses (εἰς) communicates something incongruous to annihilation. One doesn’t go “into” annihilation, rather they are annihilated. The preposition connotes “extension toward a goal which is inside an area,” just as “Judas turned aside to go to his own place.”4Michael R. Burgos, “Hell No: The Terrible Hermeneutic of the Annihilationist,” unpublished paper, accessed July 4, 2020, https://www.academia.edu/32877479/Hell_No_The_Terrible_Hermeneutic_of_the_Annihilationist.

Burgos here accurately quotes Louw and Nida’s lexicon, but he gives readers the impression (unintentionally, I suspect) that the definition he quotes is the definition of the preposition, according to Louw and Nida.5This may be because Logos Bible software takes one immediately to the definition Burgos quotes when one right-clicks on the preposition in Matthew 25:46 and looks it up in Louw and Nida’s lexicon. Spoiler alert: it’s not. In fact, Louw and Nida offer numerous definitions. Under the entry “ἀπό…εἰς; εἰς,” for example, Louw and Nida offer the definition, “markers of a change of state—’from…to, to, for,” as in Romans 8:21, where Paul says “the creation itself will also be set free from the bondage of decay into [εἰς] the glorious freedom of God’s children” (NET).6Johannes P. Louw and Eugene A. Nida, Greek-English Lexicon of the New Testament: Based on Semantic Domains, vol. 1, Introduction and Domains, 2nd ed. (New York, NY: United Bible Societies, 1988), 155. Of course, to quote Burgos, “One doesn’t go ‘into'” freedom; rather, one is freed. Likewise, one can “go into punishment,” meaning one is punished.

In fact, every lexical authority worth its salt offers definitions of εἰς that are congruous with the conditionalist reading of Matthew 25:46. Bauer, Danker, Arndt, and Gingrich (BDAG) list the following as the preposition’s fourth major category of meaning: “marker of goals involving affective/abstract/suitability aspects.” The very first such definition under this category is, “entry into a state of being w. verbs of going, coming, leading, etc., used in a fig. sense.” And the very first text BDAG offers as an example of this definition is Matthew 25:46.7Walter Bauer et. al., A Greek-English Lexicon of the New Testament and Other Early Christian Literature, 3rd ed. (Chicago, IL; London, UK: University of Chicago Press, 2000), 290. This is to say, the one group goes “into” the state of life, the other “into” the state of punishment—and this can be so if said punitive state is that of being dead. In its entry on εἰς, The Theological Dictionary of the New Testament discusses uses of “εἰς in a Logical Connection,” including when it “denotes appointment.” It cites 1 Corinthians 14:22 as an example of this use, in which Paul says, “tongues are [εἰς] a sign,” as well as Colossians 2:22, in which he says, “These are all destined [εἰς] to perish with use.”8Albrecht Oepke, “εἰς,” in The Theological Dictionary of the New Testament, eds. Gerhard Kittel, Gerhard Friedrich, and Geoffrey W. Bromiley, vol. 2 (Grand Rapids, MI: Eerdmans, 1964), 428. In neither case does something go “into” a location. Instead, something is appointed or destined to a telos, an end. The New International Dictionary of New Testament Theology and Exegesis observes, “There is no dispute that εἰς can express metaph. direction, i.e., goal or purpose (final or telic εἰς). A celebrated example is the εἰς αὐτόν of Col 1:16 which indicates that Christ is not only the efficient cause of creation, but also its ultimate goal.” It goes on to explain, “A sim. semantic function is involved when εἰς marks the divine appointment of believers to eternal life.”9Moisés Silva (ed.), “εἰς,” in New International Dictionary of New Testament Theology and Exegesis, vol. 2 (Grand Rapids, MI: Zondervan, 2014), 121. Again, the preposition can communicate the concept of appointed or destined telos, or end.

In his open letter to his “traditionalist friends,” friend and fellow Rethinking Hell contributor Glenn Peoples observes that “if this theological disagreement [between traditionalists and conditionalists] were a war, [traditionalists] would be losing.” In his letter, Peoples seeks to explain some of the reasons this is happening. First among the reasons he offers is that traditionalists’ “interpretation of the relevant biblical texts is really bad,” including that their “exegesis is sometimes hasty and/or careless.”10Glenn A. Peoples, “An Open Letter to My Traditionalist Friends,” unpublished article, http://www.rightreason.org/article/theology/open-letter-traditionalist-friends.pdf. The error “into” which Burgos falls in his article is a case in point.

I know Burgos takes exegesis seriously. His interpretation of Scripture is usually much more careful and far less sloppy. Yet, in his honest (but perhaps misguided) desire to turn the tide of the war his side is losing, he evidently chose not to consult other definitions of εἰς offered by Louw and Nida. He evidently chose not to consult definitions offered by other respected lexical authorities. He evidently chose not to look at the variety of ways εἰς is used elsewhere in the New Testament. It seems he simply saw the English word “into,” thought to himself, “Hey, that sounds like movement into a place,” and found one definition in Louw and Nida’s lexicon that supported this thought. He then threw the argument into his paper, without doing the exegetical legwork he would have done in virtually any other context.

The reality is, the preposition εἰς in Matthew 25:46 is in no way a challenge to a conditionalist reading thereof. Having already used the phrase “eternal fire” to refer to the fiery, death-dealing wrath of God, and by assuring the unrighteous that they will not receive “eternal life,” Jesus here makes clear that the “eternal punishment” to which they are appointed or destined—their ultimate telos or end—is death forever, not immortality and everlasting life in hell. 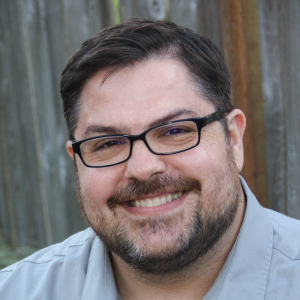 Chris Date is Adjunct Professor of Bible and Theology at Trinity College of the Bible and Theological Seminary and co-editor of Rethinking Hell: Readings in Evangelical Conditionalism (Cascade, 2014) and A Consuming Passion (Pickwick, 2015). A full-time software engineer, Chris believes theology and apologetics are for every average joe in the pews, and not just for pastors, philosophers, PhD’s and the erudite in ivory towers. Formerly a traditionalist, he became convinced of the biblical view of final punishment over the course of a process which began when he interviewed Edward Fudge, and he has since defended the view in several debates and on Justin Brierley's Unbelievable? radio program on Premier Christian Radio UK. Chris is also a steward of the Rethinking Hell project.
All Articles
PreviousEpisode 141: Date vs. Costa on Hell; Debate Review, Part 3
NextEpisode 142: “Will the Lost Remain Alive in Hell Forever?” Chris Date and Ross Burns Debate Hell
Scroll Up