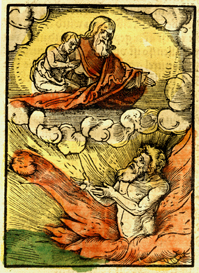 Here is the parable in question, as recorded in Luke 16:19ff:

19“Now there was a rich man, and he habitually dressed in purple and fine linen, joyously living in splendor every day. 20And a poor man named Lazarus was laid at his gate, covered with sores, 21and longing to be fed with the crumbs which were falling from the rich man’s table; besides, even the dogs were coming and licking his sores. 22Now the poor man died and was carried away by the angels to Abraham’s bosom; and the rich man also died and was buried. 23In Hades he lifted up his eyes, being in torment, and *saw Abraham far away and Lazarus in his bosom. 24And he cried out and said, ‘Father Abraham, have mercy on me, and send Lazarus so that he may dip the tip of his finger in water and cool off my tongue, for I am in agony in this flame.’ 25But Abraham said, ‘Child, remember that during your life you received your good things, and likewise Lazarus bad things; but now he is being comforted here, and you are in agony. 26And besides all this, between us and you there is a great chasm fixed, so that those who wish to come over from here to you will not be able, and that none may cross over from there to us.’ 27And he said, ‘Then I beg you, father, that you send him to my father’s house— 28for I have five brothers—in order that he may warn them, so that they will not also come to this place of torment.’ 29But Abraham *said, ‘They have Moses and the Prophets; let them hear them.’ 30But he said, ‘No, father Abraham, but if someone goes to them from the dead, they will repent!’ 31But he said to him, ‘If they do not listen to Moses and the Prophets, they will not be persuaded even if someone rises from the dead.’”

Now, when reading the text, pay special attention to the bolded portions. For at least three reasons it is very clear that this parable has nothing to do with final punishment at all, even if it is to be taken literally.

1. The rich man and Lazarus are dead.

Verses 19-21 very briefly tell the story of Lazarus and the rich man in life, and then in verse 22 both die. The rich man is explicitly said to have been buried. There is no mention of the second advent, the resurrection, or the judgment; the bodies of both men are in the ground when the proceeding scenario takes place. Traditionalists who challenge conditionalism by arguing from this parable unwittingly deny the resurrection from the dead unto judgment.

Even if we were to assume that Jesus is recounting an actual event rather than telling a parable—as some insist, for various reasons—then, at best, this is an account of what happened to two men while dead and buried. It’s not about final punishment.

Verse 23 says that whereas Lazarus is taken to Abraham’s bosom upon his death—believed by many to be the abode of the righteous dead1For example, Robert Morey identifies Abraham’s bosom as conscious bliss on the part of the righteous dead (Death and the Afterlife [Bethany House, 1984], 207). Kenneth Boa and Rob Bowman call it “a place of rest for the righteous” (Sense & Nonsense About Heaven & Hell [Zondervan, 2007], 31). John Calvin says that “believers, when they die, make a nearer approach to the enjoyment of the heavenly life. Still … the glory of immortality is delayed till the last day of redemption” (Calvin’s Bible Commentaries: Matthew, Mark and Luke, Part II [Forgotten Books, 2007] 166-167).—the rich man is taken to Hades. In the New Testament this Greek counterpart to the Hebrew Sheol never refers to the eternal state following resurrection unto judgment. It refers to the grave, or perhaps as Thayer called it, “the common receptacle of disembodied spirits.”2“Dictionary and Word Search for hades (Strong’s 86).” Blue Letter Bible. 1996-2012. Retrieved 22 June 2012. Robert Jamieson said it is “not the final place of the lost … but as we say ‘the unseen world’.”3Jamieson, R. “Commentary on Luke 16.” Commentary Critical and Explanatory on the Whole Bible.

In Acts 2:27 Paul quotes the psalmist as saying of the Messiah, “You will not abandon my soul to Hades, nor allow your Holy One to undergo decay.” John Gill commented on this verse, saying that “he believed [his Father] would not leave his soul, as separate from his body, in Hades … but would quickly return it to its body.”4Gill, J. “Commentary on Acts 2:27.” The New John Gill Exposition of the Entire Bible. 1999. Jamieson called Hades in this verse the soul’s “disembodied state.”5Jamieson, R. “Commentary on Acts 2.” Commentary Critical and Explanatory on the Whole Bible. Albert Barnes wrote, “That [Christ] went to the region of the dead is implied, but nothing further.”6Barnes, A. “Commentary on Acts 2.” Barnes’ Notes on the New Testament.

What’s more, in Revelation 20:13 “death and Hades gave up the dead which were in them; and they were judged, every one of them according to their deeds.” There is a strong argument to be made for conditionalism from this passage, but I’ll save that for another day. The point is that the apocalyptic symbolism portrays the dead coming out of Hades to be judged. This imagery communicates the “resurrection of judgment” of John 5:29, after which the reprobate receive their final punishment in the lake of fire. Again, traditionalists who challenge conditionalism by arguing from this parable unwittingly deny the resurrection of the dead.

Even if we were to take literally every detail in this story which Jesus tells, then at best this is a description of what literally takes place as the disembodied souls of the unrighteous dead experience torment in the intermediate state, awaiting resurrection unto judgment. It’s not about final punishment.

In verses 27-28 the rich man pleads with Abraham to send Lazarus to the rich man’s house to warn his living brothers, so that they would not share his own fate in Hades. In verse 30 he suggests to Abraham that if Lazarus were to go to the rich man’s brothers from the dead then they will repent; and in verse 31 Abraham assures the rich man that his brothers would not be persuaded even if someone rises from the dead. Traditionalists who challenge conditionalism by arguing from this parable unwittingly communicate that the eternal state is one in which some of the damned suffer in souls separated from their dead bodies while others who are not saved are walking around in bodies which haven’t died, are not suffering, are blissfully ignorant of their need for repentance.

No matter how we take Jesus’ story—whether as familiar folklore, unique parable, or historical narrative—it is talking about the intermediate state. The grave. The first death. Awaiting resurrection. While others are still living. No matter how you slice it, it’s not about final punishment.

For perhaps these reasons many traditionalists recognize that this parable is concerning the intermediate state and not the final one. Kenneth Boa and Rob Bowman write: “The term Hades in this passage clearly means a netherworld or underworld where the dead exist.”7Boa, K., & Robert Bowman, Jr. (2007). Sense and Nonsense about Heaven and Hell (Zondervan), 31. John Blanchard says that, when people die, “the souls of the righteous go immediately into God’s presence … What happens to the souls of the wicked? One of the clearest answers to this question comes in the story Jesus told about the rich but godless man” in this passage.8Blanchard, J. (1995). Whatever Happened to Hell? (Crossway), 84. Even the infamous Robert Morey tells us that “’Paradise’ was understood to refer to that part of Hades which was reserved for the righteous dead … popularly known at that time as Abraham’s bosom (Luke 16:19-36).”9Morey, R. (1984). Death and the Afterlife (Bethany House), 207.

But are there not questions which conditionalists still need to answer that are in some way relevant to this passage? Yes. Once traditionalists recognize the obvious, that this parable is arguably about the intermediate state, there are still a few questions they might legitimately pose to conditionalists. Of course, I think there are good answers to them, which I will discuss in future posts here at Rethinking Hell. But for now, I encourage our traditionalist readers to read the text again, and instead of isolating the rich man’s torment in fire from the rest of the parable, pay attention to what is going on. It’s not about final punishment.

Chris Date is Adjunct Professor of Bible and Theology at Trinity College of the Bible and Theological Seminary and co-editor of Rethinking Hell: Readings in Evangelical Conditionalism (Cascade, 2014) and A Consuming Passion (Pickwick, 2015). A full-time software engineer, Chris believes theology and apologetics are for every average joe in the pews, and not just for pastors, philosophers, PhD’s and the erudite in ivory towers. Formerly a traditionalist, he became convinced of the biblical view of final punishment over the course of a process which began when he interviewed Edward Fudge, and he has since defended the view in several debates and on Justin Brierley's Unbelievable? radio program on Premier Christian Radio UK. Chris is also a steward of the Rethinking Hell project.
All Articles
PrevPreviousSalted with Fire: Annihilation and Mark 9:49
NextDr. James White Reviews Date vs. WhippsNext
Scroll Up