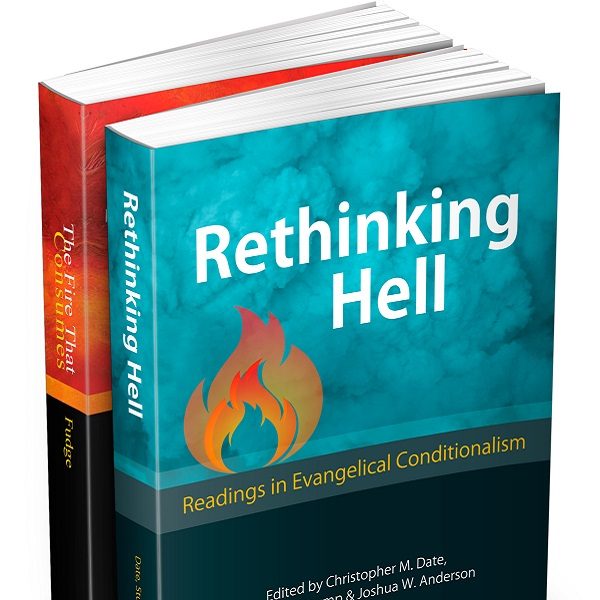 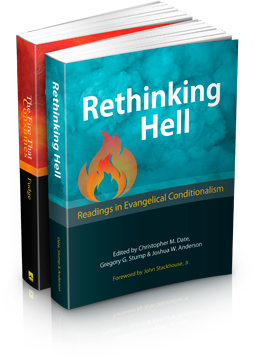 We’ve hinted at it here and there, but we had to keep it on the down low. Now that contracts have been signed and accepted, we are excited to be able to officially announce the upcoming publication of our very first book, Rethinking Hell: Readings in Evangelical Conditionalism! (Cover design in image at left is indicative only.) Wipf & Stock (W&S), the publishers of the 3rd edition of Edward Fudge’s The Fire That Consumes, has agreed to publish our book as well, very likely in time for our upcoming conference in July, 2014.

Rethinking Hell: Readings in Evangelical Conditionalism has been edited by Chris Date, Greg Stump, and Joshua Anderson, and includes original introductory chapters by Peter Grice and Glenn Peoples, as well as a foreword written by Professor John Stackhouse Jr. The book brings together in a single, convenient publication the often difficult to obtain works of a variety of authors articulating and defending conditional immortality and the annihilation of the finally impenitent, or defending it as a view an evangelical can legitimately espouse. Authors and their reproduced works include:

When my friend and fellow Rethinking Hell contributor, Greg Stump, originally told me about his dream of publishing a book compiling what many authors before us have variously written in defense of conditionalism, it seemed like a bit of a pipe dream. Later, Greg reported to us that he had had an opportunity to pitch his book idea to John Wipf, co-founder of W&S, who liked the idea and said it sounded like exactly the sort of thing they would publish. What at first seemed like little more than a dream was beginning to seem possible. And then, not long after submitting an official proposal form, I nearly fainted in shock when I received the email telling us W&S had accepted our proposal.

Since then Greg, Joshua and I have been frantically preparing the manuscript for delivery to W&S on December 31st: transcribing originals; writing prefaces and introductions; securing licenses to republish excerpts; and much, much more. The Lord has blessed us and things have come together nearly without a hitch, and we’re confident that wherever you currently stand on the issue of hell, you’ll be personally edified by Rethinking Hell: Readings in Evangelical Conditionalism. 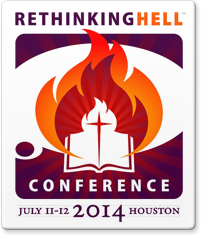 And if you’re already convinced of conditionalism, you might want to consider giving the book as a gift to your traditionalist friends and family.

Though not yet officially available for pre-order through W&S and other retailers, Rethinking Hell: Readings in Evangelical Conditionalism is available as an optional addition to your conference registration or sponsorship package, available for purchase now. Reserve your copy today, and pick it up and have it signed in-person in July!

Chris Date is Adjunct Professor of Bible and Theology at Trinity College of the Bible and Theological Seminary and co-editor of Rethinking Hell: Readings in Evangelical Conditionalism (Cascade, 2014) and A Consuming Passion (Pickwick, 2015). A full-time software engineer, Chris believes theology and apologetics are for every average joe in the pews, and not just for pastors, philosophers, PhD’s and the erudite in ivory towers. Formerly a traditionalist, he became convinced of the biblical view of final punishment over the course of a process which began when he interviewed Edward Fudge, and he has since defended the view in several debates and on Justin Brierley's Unbelievable? radio program on Premier Christian Radio UK. Chris is also a steward of the Rethinking Hell project.
All Articles
PrevPreviousEpisode 44: The Geography of Hell, with Kim Papaioannou
NextRethinking Hell 2014 Conference Announcement!Next
Scroll Up