The first edition of Four Views on Hell was structured quite differently from the recently released second edition. The original featured two versions of eternal torment (literal and metaphorical), conditionalism, and a Catholic purgatorial view. The fact that evangelical universalism was excluded, and purgatory was presented and a Catholic position shows how much evangelical conversations have shifted since that edition. At the time, few would have imagined that evangelical protestants would argue for universalism and purgatory (although, few would have considered conditionalism a valid option for evangelicals either). The landscape has changed, and now, it seems that some evangelical protestants are showing interest in the notion of purgatory, so a protestant argument for purgatory appears in the new edition of Four Views

Walls’ purgatory chapter does feel a bit out of place in this volume, since it is not actually about hell. On the topic of hell, Jerry Walls does affirm eternal conscious torment. Purgatory is something other than hell; it is only for those who will ultimately share in salvation and the life of the age to come. This leaves us with the question of why editor Preston Sprinkle chose to include this discussion. Interesting though it may be, it isn’t a view on hell. But if we expand the conversation to encapsulate a broader discussion of postmortem punishment and suffering then it can fit the bill.

Walls argues that for some who share in the salvation of God, there will still be a period of purification required to complete the process of sanctification. Sin must be completely purged for God’s people to come into his presence. Purgatory is therefore a place of hope; “All souls admitted to purgatory are bound for heaven sooner or later”1Walls’ choice of “souls… bound for heaven” here seems in conflict with the biblical picture of eternal life occurring in the age to come as embodied life in the new heavens and new earth. (147). 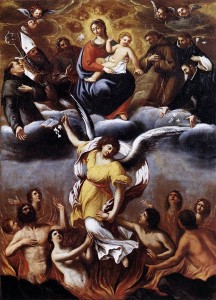 This claim may sound strange to most protestant ears- it certainly does to mine- given Scripture’s depiction of resurrection and judgment, which declare that transformation comes “in a flash, in the twinkling of an eye” (1 Cor. 15:52). It seems the motivation for this thinking is the assumed need to deal with the questions surrounding cases of deathbed conversion, or those who make a confession of faith, but show little or nor evidence of transformation. Shouldn’t there be consequences for those who repent at the last moment, and haven’t undergone any form of discipleship or sanctification? Wouldn’t it be unjust if they were to avoid the struggles and hard work experienced by other Christians? But it seems Jesus makes exactly that claim in the parable of the workers in the vineyard (Matthew 20:1-16)- whether the workers start at the beginning, the middle, or near the end of the day, they are all paid a days wage.

The assertion that some sinners saved by grace will have to undergo a time of punishment prior to their entrance into the eternal life of the age to comes has some important implications for our understanding of atonement. However one understands the mechanics of atonement, if our sin was fully dealt with through Christ’s death and resurrection, why is a period of purging still necessary? To suggest that redeemed persons may still have some punishment to endure means that Christ’s death and resurrection has not been fully efficacious. This is highly problematic.

Perhaps the most obvious struggle in Walls presentation, which the other authors pounce on in their responses, is the overall lack of engagement with Scripture. Burk notes in his response, “I counted about eight passing references to Scripture. None of those eight references to Scripture are accompanied by serious exposition of the text in question” (174). Most of Walls’ biblical evidence boils down to 1 Cor. 3:11-15. The problem is that even though the text does speak of redeemed people being saved as through a fire, one can hardly build a developed notion of purgatory based on this text alone. This text seems to speak of the process of judgement, not an ensuing process of purgation. Most of Walls’ work centres around CS Lewis. Of course, protestants love Lewis, but when it comes to building a doctrinal understanding of postmortem realities, without more scriptural evidence than Walls provides, I don’t see his argument as at all compelling.

So, while Walls’ chapter was an interesting read, it was hardly convincing. Given the role of purgatory in so much of Christian history, it makes for a fascinating investigation. However, with no real biblical exegesis presented, and the problems this proposal creates for systematic theology, particularly the completeness of Christ’s death and resurrection in dealing with sin and its consequences, I have to conclude that Walls has not brought forward evidence to lead one to reintroduce purgatory to protestant thought.