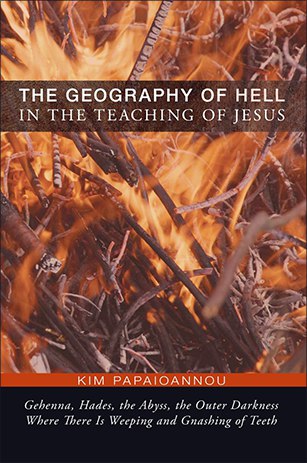 Kim Papaioannou. The Geography of Hell in the Teaching of Jesus: Gehenna, Hades, the Abyss, the Outer Darkness Where There is Weeping and Gnashing of Teeth. Eugene: Pickwick, 2013.*

Kim Papaioannou has appeared on our podcast in the past, and is a notable advocate of annihilationism. In this book, Papaioannou examines specifically the teachings of Jesus in the Synoptic Gospels which give a specific location connected with the post-mortem fate of those who reject God’s salvation using a detailed historical approach (reading Biblical texts alongside other Jewish and Early Christian texts). This limits the discussion to a manageable set of texts and ideas. He notes that within the Synoptics, the locations identified, and the descriptions and functions of those locations vary, so the sections are broken up by the various terms employed by Jesus (I. Gehenna, II. Hades, III. Abyss/Tartarus, IV. Outer Darkness Where There is Weeping and Gnashing of Teeth) and each chapter focuses in on a particular text (or set of synoptic parallels) where these designated locations are used by Jesus.

The introduction sets out his methodology and important factors influencing the overall conversation. One interesting note he offers is that most or perhaps all of the non-biblical texts (e.g. 4 Ezra, 2 Baruch, Ascension of Isaiah, 3 Enoch, Apocalypse of Abraham, Sibylline Oracles) which locate the punishment of the lost in Gehenna, the valley south of Jerusalem, which is usually translated Hell, and most or all of the Jewish texts which speak of ongoing torment of the lost are written (or at least take their final form, as many are composite or redacted texts) after the composition of the New Testament. This means that the discussion of final punishment at the time of Jesus is far more unspecific than many would assume, and it may be that Jesus informs the future discussions rather than Jesus affirming the already existing beliefs, and also suggests that Jesus’ source material is almost exclusively the Old Testament (and most notably Isaiah and Jeremiah) which doesn’t appear to have been developed into a clear and systematic eschatalogical expectation prior to the post 70 ad period.

From that starting point, Papaioannou investigates Jesus’ teaching regarding Gehenna and concludes “it seems… that there is no evidence that Gehenna was part of the common eschatalogical judgment parlance at any time before the first century AD” (21, emphasis original). It seems that Jesus’ primary background was Jeremiah, Joel, and Isaiah 66 (which doesn’t specify a location, but which Jesus connects to Gehenna). These Old Testament prophesies, and the usage by Jesus in the Synoptics indicate not an ongoing torment in Gehenna, but of Gehenna as a disposal site for dead bodies, consumed by fire, and the imagery of unquenchable fire and undying worms “denotes the certainty and completeness” of the destruction, not ongoing agony. He shows that Jesus’ teaching in Matthew 10:28 makes an explicit connection between Gehenna and destruction. The verb destroy, when used in the active voice (as it is in this verse), and have people as its subject, means “kill, destroy” (ie. ending life) not “ruin” or “loss” as it can mean when used in relation to inanimate objects. Papaioannou’s conclusion to part 1 is that all the Gehenna passages share 4 common elements: “emphasis on the body, judgement after resurrection, annihilation rather than torment, strong Old Testament influence” (81). The development of Gehenna as a place of ongoing suffering seems to be post-Jesus, and even post New Testament era, rather than something known to and assumed by Jesus and the Apostles, and the original Jewish hearers.

Second, Papaioannou covers the texts referring to Hades, spending most of his time on Luke 16. He suggests that Hades is not to be equated with Hell/Gehenna as a final place of punishment, but strongly suggests a post-mortem image/location of all people between death and resurrection to judgement; “Hades is a synonym for the grave” (88). In Luke 16, the rich man is in Hades, and his brothers are still alive, indicating his torment is neither eschatalogical nor unending. The parabolic nature should not lead us to read too much into this text in terms of specifics of the conditions of the afterlife. The obvious hyperbole (e.g. a single drop of water on a finger tip, carried across a chasm onto the rich man’s tongue is supposed to have a real impact on the man’s suffering?) leads Papaioannou to reject suggestions that this text is not a parable, or that it is a parable which provides specific and realistic depictions of the final state of the lost.

The third and fourth parts are less in depth, mainly because there are fewer texts to manage. The Abyss, he concludes is used only when depicted the imprisonment of demonic spirits. So, much like the use of Tartarus in 2 Peter, we cannot see any suggestion in the teaching of Jesus that these apply to humanity. The outer darkness, and weeping and gnashing of teeth imagery depicts not an ongoing place of torment, but an exclusion from the age to come. Surveying the biblical uses of weeping and gnashing of teeth, Papaioannou concludes, citing Edward Fudge, that these are not to be read as eternal torments, but as grief/sadness, and anger. He makes particular note of Psalms 35, 37, and 112 which employ the image of teeth gnashing, and particularly Ps. 112:10, where the enemies of God gnash their teeth in anger as they waste away and perish.

The conclusions to which Papaioannou comes are solid enough. Though many might dispute his claims, the exegesis and historical evidence is entirely compelling. The use of these images by Jesus certainly do not seem consistent with a notion of an otherworldly place where the lost are tormented forever while the redeemed enjoy bliss in the presence of God forever. Instead, the Old Testament background, and the language of death and destruction fit much more comfortably with annihilationism. Of course, there is more to say in the discussion of the fate of the lost when we bring in more texts; those outside the Synoptic Gospels, and those which do not provide a specific place. But in terms of what the Gospel writers record regarding Jesus’ use of location designations and post-mortem punishments, the weight of the evidence favours Papaioannou’s argument.

This is not to say his work is not without some nitpicky problems. For example, in the introduction he argues that the duration of hell was set at the Council of Constantinople in 543 AD. This is problematic since Constantinople II was convened in 553, and made no specific decisions on the duration of hell, though it may have accepted a list of anathemas against Origen and some of his interpreters, which included a statement against the belief in a restoration (apokatastasis) of souls to their pre-existent, disembodied state. However, this was certainly not a definitive statement in favour of eternal torment. For more on this, see here.

The other minor issue comes on pages 90-93. In his section on Gehenna, Earlier, Papaiannou goes to great lengths to show that several key Jewish and early Christian texts should not be seen as influencing the teaching of Jesus, but the same texts he identifies as coming after the New Testament’s completion and thus not evidence of common parlance in Jesus’ day, he then includes as evidence regarding the notions of Hades in the time of Jesus.

Overall though, this is a very valuable resource, which carefully examines the historical formations of the notions of Hell, and exposes several unsubstantiated assumptions of many regarding how Jesus and his contemporaries spoke about the final punishment. Overwhelmingly, we see that Jesus adopts with only minor adjustments, the imagery of Joel, Jeremiah, and Isaiah. The depictions of battles between God and his people against the nations, and the temporal judgements which would ensue are reframed around an eschatalogical vision. The weight of the evidence which is brought forward is immense, and compelling, and what we see here is such that we should expect the teaching of Paul, Peter, John, James, and Jude to be consistent with the teachings of Jesus, which Papaioannou has demonstrated quite convincingly is completely inconsistent with the notion of eternal torment in an underground or otherworldly place. Instead we see a depiction of bodily resurrection, followed by judgement, and annihilation.

*Rethinking Hell was provided a free reviewer’s copy by the publishers in exchange for an honest review. Many thanks to Pickwick/Wipf & Stock.

All Articles
PrevPreviousAtonement Debate Redux: Lean Not On Your Own Understanding
NextThe Annihilation of Hell? A Response to Alan GomesNext
Scroll Up
English
English
Español de Puerto Rico