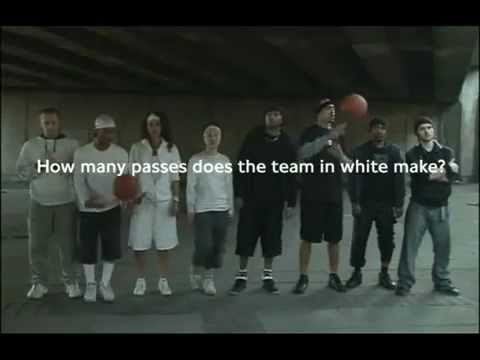 There was a popular awareness test video from when I was in college that I think can be very illustrative of an important point to remember when reading the scriptures. And this lesson is not only relevant when studying what the Bible says about final judgment. Rather, it is something believers should always remember.

I do definitely encourage you to watch the above video if the link is still active. It’s short and humorous and it helps get the point across.

Now, the video above is called “the awareness test.” They show two teams of basketball players, one team in black and one in white. Both teams pass a basketball to their teammates simultaneously. You are asked to count how many times the team in white makes.

Here’s the fun twist: after they finish passing the ball and you are told how many passes the team in white made, you are then asked “but, did you see the moonwalking bear?” The video then rewinds, and sure enough, some guy in a black bear suit walks in the middle of the screen, completely visible, dancing and being really conspicuous before moonwalking away. And if you are skeptical, you can rewind the actual video yourself and the bear is there, clear as day.

The closing message: “it’s easy to miss something you’re not looking for. Look out for cyclists.”

The whole thing was a public service announcement about safe driving. If you are not careful and you do not pay special attention when making certain maneuvers while driving, you may hit a cyclist that you didn’t even notice.

The video is short and silly but it makes a profound point. The human mind is limited and imperfect.1Don’t get me wrong, I would argue that the human brain is the most magnificent entity in the natural universe. A supernova could destroy an entire solar system and a black hole could devour an entire galaxy for all I care, but neither has the power of abstract thought. It can only do so much at a time. If we think about it, I’m sure we all have anecdotes of times we literally looked right at someone or something and our minds did not recognize that they were there. In the class where I first saw this video, one of the professors recounted a time when he was at a store and a young woman was talking on her cell phone. She walked right towards him, was staring straight at him, and she just kept walking until she ran right into him. Even though her eyes saw him, her mind did not realize he was there because she was distracted and was not paying attention to see if someone was in front of her.

It’s easy to miss something you’re not looking for.

And if it’s easy to miss something you’re not looking for, why would we be surprised if this is the case when reading the Bible?

Now, one might say that reading the Bible is different because God guides you in the process. Now, I certainly don’t deny that God guides believers as they go through his word. For example, I don’t think it is coincidence that believers who read the Bible with a humble spirit that wants to know more about their God stumble upon passages, seemingly by chance, that have a profound impact on them.

But here’s the thing: if God guiding believers through the scriptures meant that they would not make mistakes, miss things, or come up with incorrect interpretations, how then could so many godly people disagree on so many major theological issues? Disagreement as to matters of fact, including the facts of what the Bible teaches, necessitate that at least some people are wrong. That’s just basic logic. So then, many godly people, even the great names of the faith, have been wrong about many important doctrines and truths of the faith.2As discussed previously here.

Unless you are to say that God only guides you and those who agree with you, and that everyone else either has been abandoned by God or is too heard-hearted to learn or whatever else, you must admit that being in God’s good graces does not prevent you from making errors. It just doesn’t. We know that it doesn’t when other issues come up, and this issue is no exception.

Many believers have gotten hell wrong, but it isn’t because they are stupid. It isn’t because God is not pleased with them. It isn’t because they are just too hard to learn. It is because we are limited in our understanding, and in this temporary, imperfect world, God does not fix every theological blunder overnight. He does not do that any more than he cures every disease or heals every hurt, even though in the eternal world to come, all who live will live without disease or suffering or false ideas about God.

This is also where the impact of tradition comes in. There is a reason that the doctrine of eternal conscious punishment in hell is called “traditionalism” by its adherents and opponents alike.3The term “traditionalism” and its derivatives are not meant to be derogatory. For more on this, see “Is Traditionalism a Pejorative?” by Ronnie of the Consuming Fire Blog. It is very traditional. It has not been unanimous, especially in the earliest centuries of Christianity, but it has been the historically dominant view.

Most believers have been told from day one that hell is a place of eternal torment. They have been told that everybody lives forever somewhere, and that the wicked live in a place of fire and torture.4For more on the lurid, violent, and physically torturous descriptions of hell given by most traditionalists throughout church history, descriptions that many traditionalists today try to run away from, see the following: Part 1, Part 2, Part 3.

Many believers in the west were raised in Christian homes and taught this as children. And even those that were not were raised as Christians were probably still brought up in a culture where even non-religious media makes regular reference to the idea of hell being a place of eternal torment.5I myself was not raised as a Christian, but even as a child, long before coming to know the Lord, I equated “hell” with eternal torture. People of all stripes are taught from the moment they come to believe (and even before that) that the alternative to having faith in Jesus and “going to heaven” is spending eternity in the bad place.

If tradition is this widespread, and taught so early, is it any wonder why people often simply do not have much of a reason to keep an eye out for mention of destruction and death in the Bible as being the punishment for sinners? Is it any wonder than many people would quote John 3:16 and Romans 6:23 and not even blink at the fact that those passages speak of life in contrast to death or perishing? I mean, if you stop and think about it, that sure sounds contradictory to the idea that everyone lives forever somewhere, at least on its face.

If you aren’t looking for what the Bible teaches about hell, because you already take for granted that hell is eternal torment, you might read right over passages like Matthew 10:28, which describes the conditionalist position about as concisely as anyone could: “And do not fear those who kill the body but cannot kill the soul. Rather fear him who can destroy both soul and body in hell” (NASB, emphasis mine). Because of tradition, the Bible saying that people’s supposedly immortal souls are destroyed in hell may not raise any red flags, even though it sounds like the exact opposite of souls being immortal, at least on its face.

By appealing to such passages I’m not attempting to make a solid case for conditionalism – that would require going much deeper. After all, as I pointed out in a previous article, you can’t just take everything in the Bible at face value. But many people do not even notice these passages and many others that tie death and destruction and loss of life to final punishment. They read right over them. Why? Because they have been taught to take for granted what hell is, and so they have no reason to look for what the Bible actually says about hell. Like the girl who ran into my professor (literally), their eyes can see it but their minds miss it. And that happens to us all, and quite frequently, I daresay. I too missed the moonwalking bear.

This is why at Rethinking Hell, in addition to the lengthy and in-depth articles about specific passages or concepts, we also feature introductory articles that sometimes just try to point to something that the reader already has seen and say “so, do you notice what that is saying?” It isn’t because we think people are stupid. It’s just that many people have never had any reason to rethink hell and keep an eye out for things they weren’t expecting to see in scripture. I’m sure there exist expert physicists and brilliant philosophers and world-class composers and poets who sincerely believe in Jesus but never once gave a second thought to the fact that everyone is supposed to live for eternity yet only the redeemed are ever said to have “eternal life” in the Bible.

That is because it’s easy to miss something you’re not looking for.

Joseph Dear is author of the comprehensive study, The Bible Teaches Annihilationism. An accounting professional by trade, in his off time he purposefully shares any insight and wisdom he gains through prayer and Bible study, in the hope that it will be useful to others in their walk with God, and may further the cause of our Lord Jesus Christ. In addition to blogging here at Rethinking Hell, Joseph maintains 3-Ring Binder, his personal website and blog.
All Articles
PrevPreviousA Primer on Revelation 14:9-11
NextHypocrisy, Not Hell: The Polemic Parable of Lazarus and the Rich ManNext
Scroll Up
English
English
Español de Puerto Rico