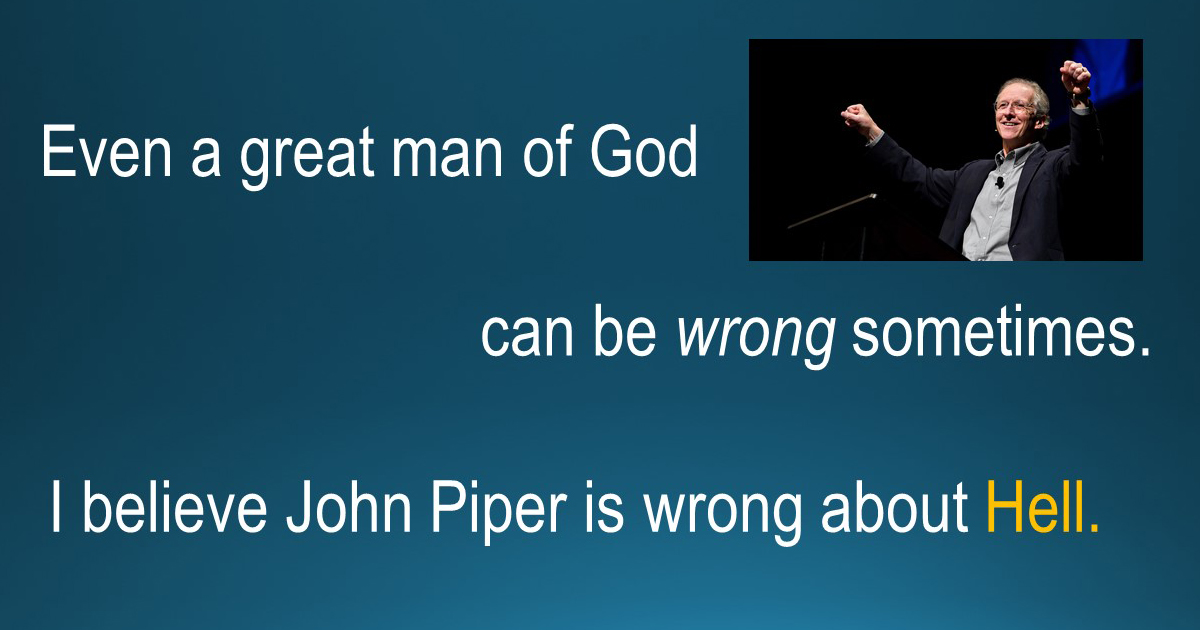 I thank God for John Piper and the work God has done and continues to do through him. I have been one of many to benefit from Piper’s books, sermons, and articles. I was blessed with the opportunity to serve the Lord in the world’s largest Muslim nation for fourteen years. During those years my coworkers and I were often encouraged and strengthened to continue in a very difficult ministry by things Piper wrote or said. And just last night, not knowing that I would be writing this article this morning, I used an article of Piper as part of a Bible study at the church where I serve.1John Piper, “Biopsy Blows and the Helmet of Hope,” Desiring God, July 28, 2009, accessed July 20, 2017, http://www.desiringgod.org/articles/biopsy-blows-and-the-helmet-of-hope. And if I had known that I would be writing this article this morning, I still would not have hesitated to use Piper’s article last night.

Having said all that, I believe that Piper is simply wrong about the nature of hell and the fate of the unrighteous. A good, godly man who God uses mightily can occasionally be just plain wrong. An excerpt from a message he gave on the topic of Hell was just posted this morning at the Desiring God website.2John Piper, “Unforgiven: The Eternal Tragedy of the Lost,” Desiring God, July 20, 2017, accessed July 20, 2017, http://www.desiringgod.org/messages/gods-wrath-vengeance-is-mine-i-will-repay-says-the-lord/excerpts/unforgiven-the-eternal-tragedy-of-the-lost. I won’t be quoting every word of Piper’s article, so I encourage you to read it for yourself, it’s not long.

Why I’m Convinced that John Piper’s Message is Wrong

Here I’ll go point by point through the transcript of the excerpt from Piper’s message. Piper is defending a view which is often called Eternal Conscious Torment (ECT). I believe in a view called Conditional Immortality (CI) or Annihilationism. As an evangelical conditionalist, I’m convinced that the Bible teaches that the unrighteous will be raised to face judgment, experience a finite amount of conscious suffering, and then perish (John 3:16), be destroyed in body and soul (Matthew 10:28), and burned to ashes (2 Peter 2:6).

When Jesus spoke these words he included quotes from the last verse of Isaiah: “And they shall go out and look on the dead bodies of the men who have rebelled against me. For their worm shall not die, their fire shall not be quenched, and they shall be an abhorrence to all flesh” (Isaiah 66:24).

Notice that the fire that is not quenched and worms that do not die are not torturing living people. They are being used to consume “dead bodies” after judgment. That makes a lot of sense because all over the world and all throughout history the vast majority of dead bodies have been disposed of either by worms turning them into dust or fire turning them into ashes. So the words Jesus speaks in Mark 9 actually support CI, not ECT.3See also Chris Date, “Their Worm Does Not Die: Annihilation and Mark 9:48,” Rethinking Hell [blog], July 17, 2012, accessed July 20, 2017, http://www.rethinkinghell.com/2012/07/their-worm-does-not-die-annihilation-and-mark-948; and Chris Date, “The Fire Is Not Quenched: Annihilation in Mark 9:48 (Part 2),” Rethinking Hell [blog], November 20, 2012, accessed July 20, 2017, http://www.rethinkinghell.com/2012/11/the-fire-is-not-quenched-annihilation-and-mark-948-part-2.

. . . but whoever blasphemes against the Holy Spirit never has forgiveness, but is guilty of an eternal sin. (Mark 3:29)

Annihilationists and traditionalists both agree that there is sin that will never be forgiven. Piper is probably using this verse to refute Universalism. I agree that this verse refutes Universalism. It says nothing one way or the other about whether those not forgiven will be tormented forever or be permanently destroyed in both body and soul (Matthew 10:28) forever.

Then he will say to those on his left, ‘Depart from me, you cursed, into the eternal fire prepared for the devil and his angels. . . . And these will go away into eternal punishment, but the righteous into eternal life. (Matt 25:41, 46)

Piper is correct in insisting that eternal punishment will last as long as eternal life. Again, this is a strong argument against Universalism. However, it is not a strong argument against CI. As the punishment conditionalists believe awaits the lost, eternal death is a form of eternal punishment. Once people are completely destroyed, they will never, for all eternity, return to life and enjoy the pleasures of knowing God and being with Him.

As far as the phrase “eternal fire” goes, it should be noted that the fire being eternal does not mean that what is cast into it must remain alive and conscious. God’s glory is presented in terms of intense, glowing, burning, fiery light throughout the Bible. “Eternal fire” may refer to this manifestation of His glory. This fire of God will be glorious to behold when we are made perfect. But the same fire destroys all who are impure. Notice that the same phrase “eternal fire” is used in Jude 7 to refer to God’s destruction of Sodom and Gomorrah. Yet fire is not currently burning there. Peter Grice provided this excellent explanation: “Fire from heaven—the consuming fire of God—may be considered eternal at its source, without this meaning that any manifestation or emanation of it must continue to burn forever.”5Peter Grice, “Annihilation in 2 Thessalonians 1:9 (Part 1): Destroyed by the Glory of His Manifest Presence,” Rethinking Hell [blog], November 14, 2016, accessed July 20, 2017, https://rethinkinghell.com/2016/11/annihilation-in-2-thessalonians-19-part-1-destroyed-by-the-glory-of-his-manifest-presence/. Perhaps this is why Jesus had earlier set up “eternal fire” as a parallel to Gehenna (Matt 18:8–9), the “Valley of the Son of Hinnom” which the Old Testament promised would become “the Valley of Slaughter; for they will bury [there], because there is no room elsewhere. And the dead bodies of this people will be food for the birds of the air, and for the beasts of the earth, and none will frighten them away” (Jer 7:32–33).

4. Piper Quotes from 2 Thessalonians 1:7–9 as Support for ECT

. . . and to grant relief to you who are afflicted as well as to us, when the Lord Jesus is revealed from heaven with his mighty angels in flaming fire, inflicting vengeance on those who do not know God and on those who do not obey the gospel of our Lord Jesus. They will suffer the punishment of eternal destruction, away from the presence of the Lord and from the glory of his might . . . (2 Thess 1:7–9)

It has always seemed strange to me that defenders of ECT have thought that the phrase “eternal destruction” supports their view. “Destruction” does not mean “torment” in English, nor do the Greek words translated “destruction/destroy” mean “torment”.

The only book of the Bible which actually mentions eternal torment is the book of Revelation. This is a book full of visions which use a lot of symbolism. Piper fails to note that John gives us the interpretation of the lake of fire symbol: “Then Death and Hades were thrown into the lake of fire. This is the second death, the lake of fire” (Rev 20:14; cf. 21:8).

The lake of fire is a symbol for dying a second time. John tells us so. There is a lot of evidence which supports the view that the lake of fire and the “second death” refer to the annihilation of the unrighteous, not their eternal torment. I have written a series of blog posts on this specific topic.8The series begins with “What is the Second Death? Part 1, Symbols and Meanings,” παρρησιαζόμαι [blog], February 18, 2017, accessed July 20, 2017, http://parresiazomai.blogspot.com/2017/02/what-is-second-death-part-1-symbols-and.html.

What Piper Leaves Out

In the excerpt provided by Desiring God, Piper does not address the many Bible passages which give strong support to CI. Here are just a few:

Matthew 10:28: “And do not fear those who kill the body but cannot kill the soul. Rather fear him who can destroy both soul and body in hell.”

John 3:16: “For God so loved the world, that he gave his only Son, that whoever believes in him should not perish but have eternal life.”

Romans 6:23: “For the wages of sin is death, but the free gift of God is eternal life in Christ Jesus our Lord.”

2 Peter 2:6: ” . . . if by turning the cities of Sodom and Gomorrah to ashes he condemned them to extinction, making them an example of what is going to happen to the ungodly;”

How Piper Helped Me Become a Conditionalist

After receiving a call from the Lord to go overseas and share His Good News among unreached people groups, I read Piper’s excellent book, Let the Nations Be Glad.9John Piper, Let the Nations be Glad! The Supremacy of God in Missions, 2nd ed. (Baker Academic, 2003). I highly recommend the book, despite a section where Piper defends ECT. Ironically, it was while reading this section of Piper’s book that I began to think that CI might be correct. Piper kindly includes some comments from John Stott in footnote #15 on page 120. God has blessed John Piper with a brilliant mind and a gift to passionately and rationally explain God’s truth. Yet, as I read this section, Piper’s arguments supporting ECT felt so weak and did not seem to have biblical support. Stott’s short comments in the footnote made sense to me. I began to think that CI might be true. It was quite a few year later, however, until I studied this topic in more depth and become convinced of CI and began to teach it. I hope some of you reading this will likewise be motivated to study this topic in more depth. I certainly don’t expect this one short post to convince you.

May God continue to bless the ministry of John Piper. This issue (ECT vs. CI) should never divide Christians. We agree that a terrible fate awaits the unrighteous and that seeing them saved from this fate is one of the motivations we have to take risks and make sacrifices to share God’s Good News and spread His love in Jesus’ Name all over the world. 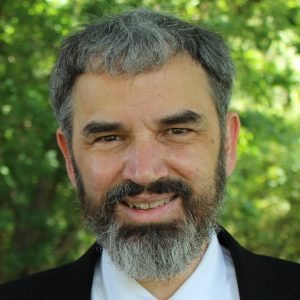 All Articles
PrevPreviousMalachi 4:1-3 and the Final Destruction of the Unrepentant
NextScrutinizing a Straw Man: A Response to Eric DavisNext
Scroll Up
English
English
Español de Puerto Rico