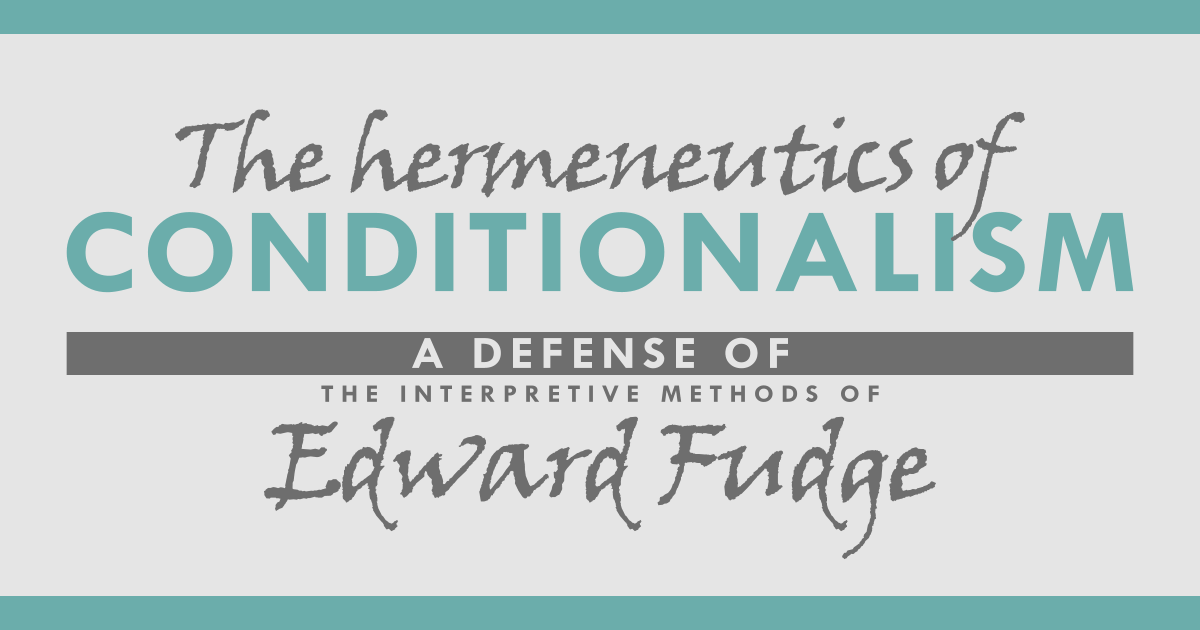 I was recently honored to be published in volume 89 of Evangelical Quarterly. Available for free at my Academia.edu profile, my article argues that, contrary to the claims of critics like Robert Peterson, “when one applies accepted principles of hermeneutics and interpretation in the task of exegeting Old and New Testament texts, one will conclude that they teach conditionalism, and not the traditional view of hell.”1Christopher M. Date, “The Hermeneutics of Conditionalism: A Defense of the Interpretive Method of Edward Fudge,” Evangelical Quarterly 89:1 (2018), 72–73. Here is the introduction, to give you a feel for what I go on to argue:

In his preface to the first edition of The Fire That Consumes, Edward Fudge invites readers to carefully scrutinize his case for the doctrines of annihilationism and conditional immortality, collectively referred to hereafter as conditionalism. “I have tried,” he writes, “to follow the ordinary methods of sound, biblical exegesis,” and he encourages readers, “Check the statements made here. Weigh the evidence. Examine the arguments. Measure this work by every proper standard.” Fudge’s invitation was accepted a decade later by Robert Peterson, who presented a paper at the 1994 Evangelical Theological Society (ETS) Convention entitled “The Hermeneutics of Annihilationism: The Theological Method of Edward Fudge.”

Having set out “to evaluate [Fudge’s] hermeneutic within the framework of his theological methodology,” in the end Peterson rejects Fudge’s case, saying, “I have evaluated Fudge’s use of the Old Testament, appeal to linguistics, avoidance of texts and of opposing arguments, logical fallacies and appeal to systematic theology,” and “I conclude that Fudge’s case for conditionalism is not as strong as he and others have thought.” Indeed, Peterson contends that “evaluated in terms of hermeneutics and theological methodology, [Fudge’s] case appears to be weak.”

Meanwhile, however, evangelical giant John Stott had already intimated that he leaned toward conditionalism for scriptural reasons, following the earlier, more confident affirmations of other evangelical scholars. In the years since Peterson’s paper was published, a number of conservative evangelicals have become convinced of conditionalism, including recently Terrance Tiessen. John Stackhouse recently wrote that conditionalism “enjoys about as strong a warrant in Scripture as … any doctrine.” Particularly relevant to Peterson’s stated conclusion is that Anthony Thiselton has also affirmed conditionalism, himself a recognized authority in hermeneutics and interpretation. The late I. Howard Marshall appears also to have inclined toward conditionalism, himself accomplished in the areas of hermeneutics and exegesis.

What, then, is one to make of Peterson’s hermeneutical assessment of the case for conditionalism? If it is as weak as he insists it is, why are conservative evangelical scholars increasingly embracing it? Why have even experts in hermeneutics like Thiselton affirmed it?

In this paper I will argue that in fact, when one applies accepted principles of hermeneutics and interpretation in the task of exegeting Old and New Testament texts, one will conclude that they teach conditionalism, and not the traditional view of hell. Along the way I will also attempt a rebuttal of some of Peterson’s hermeneutical and interpretive claims.

“The Hermeneutics of Conditionalism: A Defense of the Interpretive Method of Edward Fudge,” article in Evangelical Quarterly by Chris Date (Academia)
https://www.academia.edu/36022773/The_Hermeneutics_of_Conditionalism_A_Defense_of_the_Interpretive_Method_of_Edward_Fudge
Chris Date’s Academia.edu profile, where his article can also be downloaded
https://fuller.academia.edu/ChristopherDate

Chris Date is Adjunct Professor of Bible and Theology at Trinity College of the Bible and Theological Seminary and co-editor of Rethinking Hell: Readings in Evangelical Conditionalism (Cascade, 2014) and A Consuming Passion (Pickwick, 2015). A full-time software engineer, Chris believes theology and apologetics are for every average joe in the pews, and not just for pastors, philosophers, PhD’s and the erudite in ivory towers. Formerly a traditionalist, he became convinced of the biblical view of final punishment over the course of a process which began when he interviewed Edward Fudge, and he has since defended the view in several debates and on Justin Brierley's Unbelievable? radio program on Premier Christian Radio UK. Chris is also a steward of the Rethinking Hell project.
All Articles
PrevPreviousThe Righteous for the Unrighteous: Conditional Immortality and the Substitutionary Death of Jesus
NextBook Review: A Catholic Reading Guide to Conditional ImmortalityNext
Scroll Up
English
English
Español de Puerto Rico