Dr. Robin Parry joins Rethinking Hell contributor Chris Date to discuss his chapter on Universalism, and his responses to other contributors, in Zondervan’s forthcoming second edition of Four Views on Hell.
END_OF_DOCUMENT_TOKEN_TO_BE_REPLACED

Rethinking Hell contributors Nick and Allison Quient join Chris Date to respond to some clips from Dr. Robin Parry’s plenary speech at the 2015 Rethinking Hell Conference, in which he presented a theological case for universalism. This episode contains the second half of their two-and-a-half-hour discussion; listen to the first half in episode 76.
END_OF_DOCUMENT_TOKEN_TO_BE_REPLACED

Rethinking Hell contributors Nick and Allison Quient join Chris Date to respond to some clips from Dr. Robin Parry’s plenary speech at the 2015 Rethinking Hell Conference, in which he presented a theological case for universalism. This episode contains the first half of their two-and-a-half-hour discussion; the second half will be made available in episode 77.
END_OF_DOCUMENT_TOKEN_TO_BE_REPLACED

After a successful and inspiring first conference in Houston last summer, we are looking forward to the prospect of more conferences both in the US and abroad! We are pleased to now announce the second Rethinking Hell Conference, which will take place at Fuller Theological Seminary in Pasadena, California from June 18-20, 2015.

Our theme this year will be “Conditional Immortality and the Challenge of Universal Salvation.”

In selecting this theme, Rethinking Hell is promoting dialogue among evangelicals, by bringing our own view of conditional immortality (also called annihilationism), into conversation with universalism. Universalists believe that hell is a place of purification, out of which God will eventually redeem all who are sent there. This view has gained some popular momentum within evangelical communities since the publication of Rob Bell’s best-selling book Love Wins.

As well as the engagement of these two views, our conference will also facilitate a “trialogue” with representatives of the widely-held traditional view of eternal torment.

END_OF_DOCUMENT_TOKEN_TO_BE_REPLACED 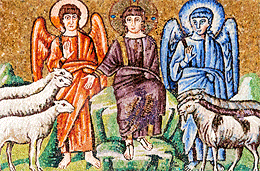 I’m an odd case in this debate. Though I now lean towards annihilationism, I consider the above quote to be one of my favorites, especially since I consider it a fine piece of patristic literature. With respect to the current debate on the eternality and function of eschatological post-resurrection punishment, all three views must put forth somewhat speculative arguments in support of refinement, torment, or death. Having been immersed in evangelical universalist literature for over a year,2Indeed, I was one before I discovered far more evidence in favor of the eternal death of mortal men and women I think I’m in a good position to offer the universalist some grist for their theological mills. This post will specifically focus on the singular proof-text3Usually cited, erroneously, by traditionalists containing a statement by Jesus in Matthew chapter twenty-five and verse forty-six. I am not entirely settled on my interpretation of this verse, as I find the narrative-historical interpretation generally offered by Andrew Perriman4The Coming of the Son of Man: New Testament Eschatology for an Emerging Church (Wipf & Stock, 2012), 282 pp. to be quite compelling. However, for the sake of this discussion, I will assume that this climactic point concerns post-mortem final judgment. For the most part I find the universalist interpretation of this text rather strained so my intent is to offer a constructive critique that will hopefully add some light instead of heat.5There are multiple authors I could engage but since Tom Talbott has the most influence within an evangelical universalist context I will limit myself to engaging with him. Also, many universalist Christians use Talbott as an exegetical and theological springboard END_OF_DOCUMENT_TOKEN_TO_BE_REPLACED