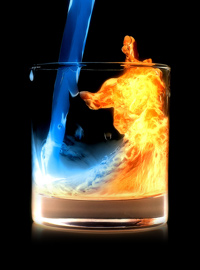 A few months ago we took a look at Mark 9:48, in which Jesus quotes Isaiah 66:24 and refers to gehenna as the place where “their worm does not die.” Critics of conditionalism often misquote or misunderstand the idiom as depicting a consuming maggot that eternally feeds upon but never fully consumes its host, and I had explained that quite the opposite is true. Similar to the scavengers of Deuteronomy 28:26 and Jeremiah 7:33 which will not be frightened away and prevented from fully consuming carrion, the worm “will not be prevented by death from fully consuming dead [bodies] … their shame is made permanent and everlasting by being fully consumed.”1Date, C. (2012, July 17). “Their worm does not die: Annihilation and Mark 9:48.” Rethinking Hell [blog]. Retrieved 16 July 2012. http://www.rethinkinghell.com/2012/07/their-worm-does-not-die-annihilation-and-mark-948/